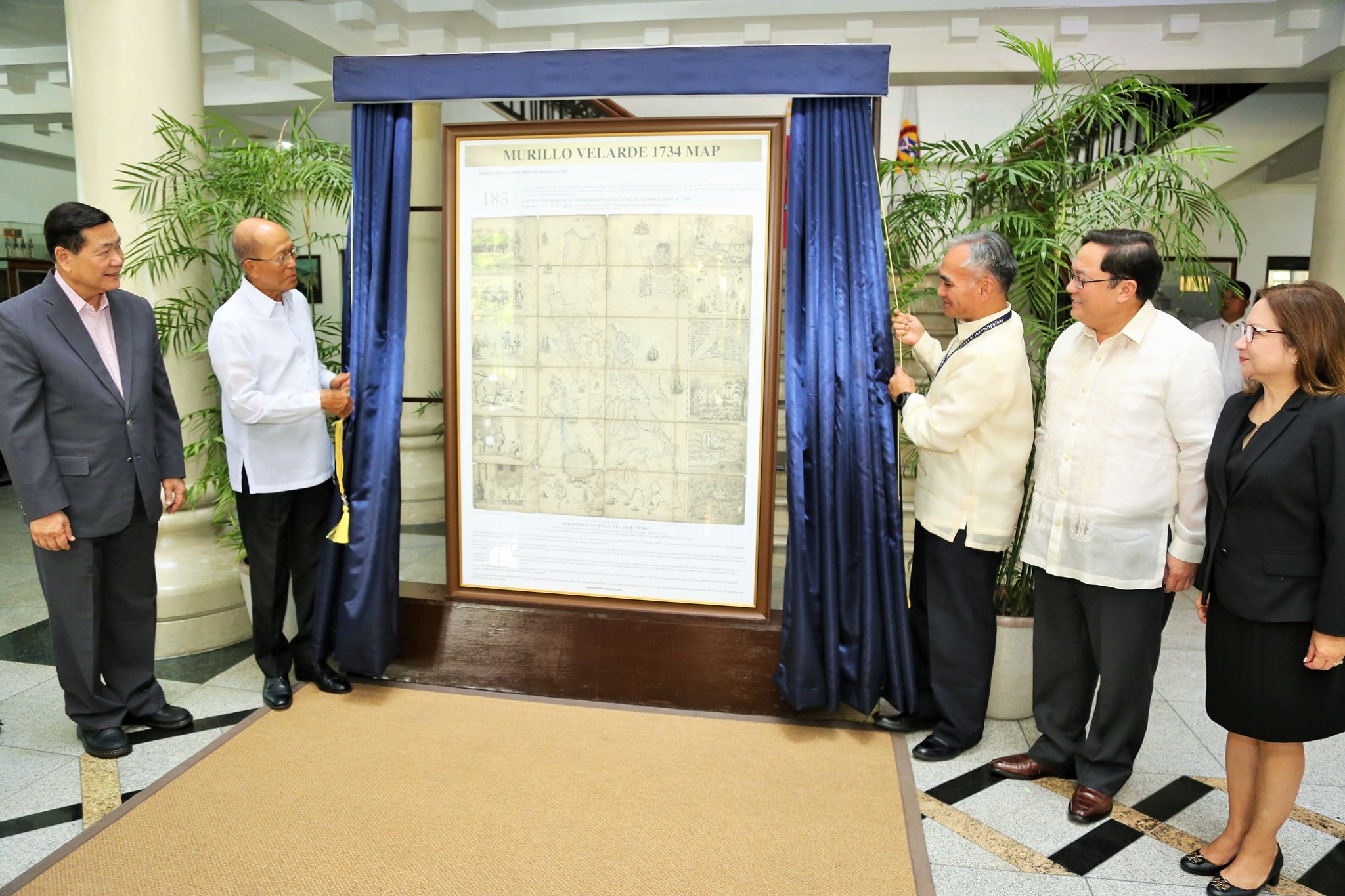 QUEZON CITY, Jan. 30 (PIA)– Secretary of National Defense Delfin N. Lorenzana led the unveiling of the official replica of the 1734 Murillo Velarde Map which was turned-over to the National Defense College of the Philippines (NDCP) on Wednesday, (Jan. 29) at the NDCP in Camp Aguinaldo.

Retired Associate Justice Antonio T. Carpio, who graced the event, discussed the history of the map and underscored its importance to the Philippines’ victory in the arbitration tribunal case.

Justice Carpio noted how the Scarborough Shoal was originally named “Panacot” in the map, reaffirming that the aforementioned waters has always been a part of Philippine territory.

The map was first made and published in Manila in 1734. It was created by Spanish Jesuit Friar Pedro Murillo Velarde (1696-1753), together with two Filipino artisans, namely, Francisco Suarez who drew the map and Nicolas dela Cruz Bagay who engraved it upon the behest of then Governor-General Fernando Valdés Tamón, in compliance with an order from King Philip V of Spain.

Regarded as the first and most important scientific map of the Philippines by the World Digital Library, the map depicts the entire archipelago as flanked by two side panels, containing six vignettes on each side that describe various ethnic groups as well as cities and islands of the country. Also shown on the map as part of national territory are Shoal Panacot, now known as Bajo de Masinloc or Scarborough Shoal and Los Bajos de Paragua, now referred to as the Island of Spratlys.

Mr. Velarde gained ownership of the artifact on 04 November 2014 through an auction by Sotheby’s London in the United Kingdom. It was among the 80 heirlooms owned by the Duke of Northumberland, Ralph George Algernon Percy.

Upon the recommendation of Supreme Court Senior Associate Justice Antonio T. Carpio, Mr. Velarde joined and eventually won the bid over the phone. The map arrived in the Philippines on 29 April 2017 and was donated by Mr. Velarde to the Philippine Government through the Office of the Solicitor General.

The original map is on display at the National Museum.

BGen. Viaje expressed appreciation to Mr Velarde and the Institute of Maritime and Ocean Affairs (IMOA) for choosing the NDCP as one of the recipients of the Velarde Murillo map.

He said, “The map promotes not just knowledge of the country as it was some centuries ago, but also nurtures a sense of patriotism and pride on the stand that the Philippines takes as a nation and the principles that it chooses to uphold despite all odds.”

The NDCP is the government’s highest center for education, training and research on defense and national security. (DND/PIA-NCR)