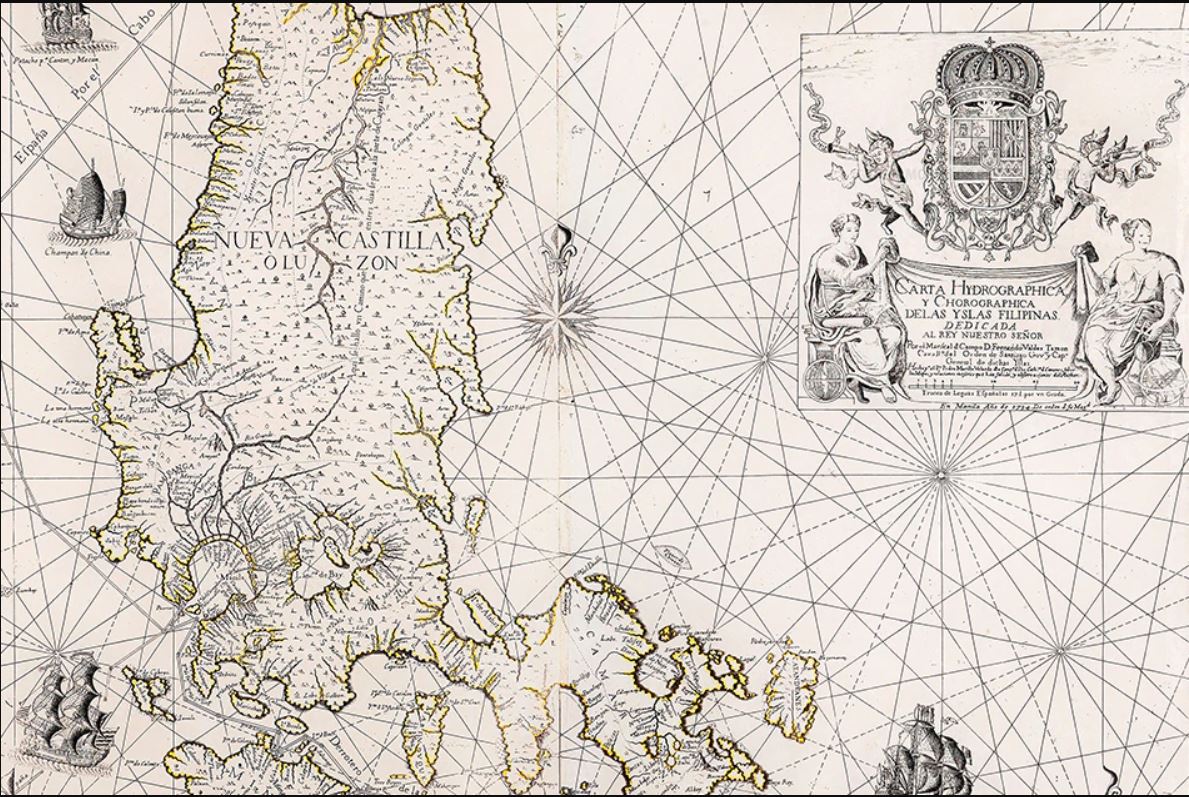 Used in the Hague proceedings on the country’s border disputes, the Murillo-Velarde map is a masterful work of art. Described by the consignor’s museum director as having “distinctive strength,” it will be auctioned off at Leon Gallery this coming Saturday.John L. Silva | Sep 10

Years back, I headed a private museum whose owner had an extensive selection of rare maps. The earliest were from the Middle Ages to early Renaissance, and were curious; our eyes gravitated toward the southern coast of China, then called Cathay to look for our archipelago which were often just a sprinkling of dots, or later, crude misshapen islands identified as Zubu (Cebu) or Vendanao (Mindanao) or the longish Paluan (Palawan).

Prominently displayed in the center wall of the map room was the 1734 Murillo Velarde map, a large, sumptuous, sharp and detailed image of the whole Las Yslas Filipinas. It was bordered by 12 intricate vignettes covering flora and fauna, various peoples, foreigners, map insets, outlying islands—a most extensive compendium of Spain’s most distant colony.

The well-etched map and the grandeur it exuded, provided much pause to visitors curious first with its creation. A Jesuit priest, Fr. Pedro Murillo Velarde had the map commissioned and engraved by a native cartographer Nicolas de la Cruz Bagay. The latter distinguished himself as the first known engraver, later to etch and print portraits, treatises, religious documents, catechisms all in the finest quality, raising the printing art to high standards for that period.

An extremely rare map, its notoriety was spiked significantly in recent years because of two events. The map was used in the Hague Court proceedings to establish the territorial integrity of the Western Philippine Seas and the other event was its winning bid for 12 million pesos by Mel Velarde, a Filipino businessman at Sotheby’s four years ago.

The last bit of information I wanted to get out of the way because ironically, the beauty and significance of an object can, in modern times, be overshadowed by how much they cost.

I was once in front of Vincent Van Gogh’s “Vase With Sunflowers” which was just sold at auction. All I could think about while gazing at it was, was it worth 39.4 million dollars? Others beside me where whispering the same. We had forgotten to look at the painting and instead, tried to fathom the price and what it could buy us.

The lesson here is developing the ability to appreciate an object for its inherent qualities and not the man-made price being ascribed to.

I thank my museum patron for teaching me that. He acknowledged that the Murillo Velarde map in his possession was, by far, the most expensive he had spent. Very few of the maps are in existence and its plates used to print them, were most probably taken by the British during the sacking of Manila in 1772.

My patron didn’t dwell on the matter of its price, but just pleased, like all collectors, to have acquired a masterpiece of a map. As a world traveler he particularly liked one of the vignettes, drawn by Francisco Suarez, showing traders from various parts of the Arabian Peninsula and south Asia coming to the colony.

In another vignette, there’s the Chinese Sangleys, a name given to traders, many later settling in the colony expanding a burgeoning Chinese-Filipino community. One such trader sports a fan and a bag of gold. Beside him is a hatted fish merchant in a raincoat with his kargador (carrier servant).

Another vignette has an Armenian and a Persian merchant smoking from a water pipe with a Malabar native from India with turban and earrings.

One vignette is intriguing. It has two men in Indian clothing from Camarin which is a native kingdom and now the state of Mangalaru, south of Goa, Southwestern India. The more interesting are the four cafres or kaffirs, a name given to north African slaves.

I’ve researched the presence of kaffirs in Manila. There was an edict by the Spanish King after receiving so many reports on the brutal killings and torture of native peoples in the Americas by the conquistadores. The king ruled that in the Philippines, the Spaniards would not be allowed to have Filipino house slaves, but could import African slaves for their use. The picture here of short slaves is erroneous. Slaves were chosen for the physique from height to being well built.

Invariably the slaves, unhappy with their cruel masters, scaled the Intramuros walls and ran away. In the Caribbean, runaway slaves were called cimarrones.

Imagine therefore these big black men, fleeing as fast as they could, chased by dogs trained to hunt and, if captured, tear them apart. The slaves would find a big acacia tree, climb up and escape the dogs. Crouched on a tree limb, waiting till the dogs leave, they often lit a home-made cigar to warm themselves. A passing native would see this menacing huge dark man and scream “Kapre! (Kaffir!)” That may have been the origin of the kapre monster in Filipino superstition.

In Mexico, I recalled a whole wall of portraits in a museum. They were the same subjects, a mother, a father and a child. But the difference is that each portrait would be about the intermarriage between the races and the classes and the result. First the portrait of the two Spanish subjects and the resulting same blood child. Then came the the Spaniard with the creole or negro, the Spaniard with the mestizo, the mestizo with mestizo, the creole or negro with the mestizo, and so forth and so on. The more intermarriage the more color mixes. There seemed to have been an obsession on how fair skinned one should be and we Filipinos have imbibed that culture of being fair till today. We are, not coincidentally, the second largest consumer of whitening soaps in the world.

In one vignette you can see a fairly white, almost ghostly Spaniard being shaded with a large umbrella by his servant. He is looking like Louis XVI with the heavy hot coat and a curly wig. To the right is a negro or creole dressed like a dandy. Further right are the native indios engaging in their favorite cockfighting and behind them the aetas, referred to as mountain savages with bow and arrows.

In another vignette is a mestizo family drawn with much detail and to the right are a Mardica, formerly of the Moluccas but emigrated to Maragondon and Ternate Cavite. Beside him is a Japanese samurai, with shaved head and his sword.

Yet another vignette illustrates an indio couple, one with a scapular and on their way to church, a female vendor nearby selling guavas, two native boys, and a Visayan man with a dagger and a balarao, a regional knife. In the back are three natives, one playing a mandolin and a couple dancing the comintang.

There are two vignettes that depict local life: One has a man cutting bamboo for the scaffolds of a house, a man on a carabao, a boy holding a bat, monkeys up a coconut tree, a palm nut tree where betel nut is derived, an albino monkey and a man carried by two bearers.

This other one has a crocodile prominent, a boa constrictor about to squeeze a pig, a farmer behind a plow, another farmer having his sled pulled by a carabao, a nipa hut on stilts, a white raven, a cacao tree, and a banana tree. A woman is pounding rice in a mortar called Luzon which Murillo says what was Luzon was once called.

There is the Fort of Zamboanga showing the various residences, there’s the fort of Cavite with names like Cavite Viejo, Binacayan, Bacoor.

The island of Guam, appears, southernmost island of the Marianas chain and for the Spaniards, part of their Philippine colony.

The walled city of Manila and the suburbs of San Miguel, the Parian, Santa Cruz, Binondo and Tondo has its own vignette. By the numerous buildings, the walled city is fairly populated and built up by the 17th century with over a dozen churches, schools, convents, government buildings and houses. There was once a moat around the city with Fort Santiago guarding the Pasig River.

The map itself has its distinctive strength. For such a large size for that period and the large precious sheets of paper needed, precision and exactness was demanded in the printing process, making sure every line, every point, every notation was as finely etched as can be.

The ownership of a rare, resplendent Murillo Velarde map conferred a mature and erudite bearing on my patron. He was well-read and quite conversant about Philippine history; the possession of such a map validated his scholarship and love for his country.

A Murillo Velarde map is up for auction at the Leon Gallery. The upcoming “Magnificent September Auction 2019” will highlight among others, the Murillo Velarde 1734 map from a private collection. An e-catalog can be downloaded here. Viewing during business hours and auction on September 14, 2019.