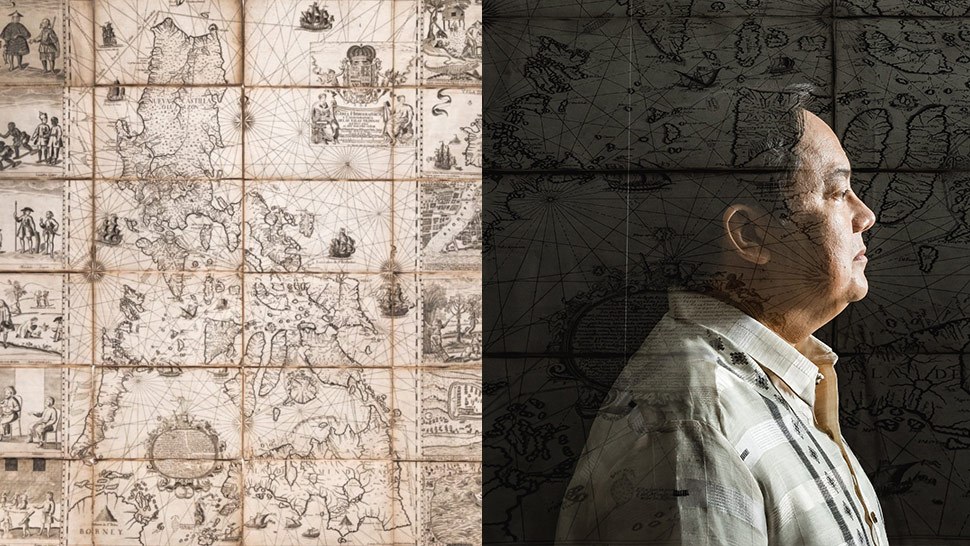 In an unusual turn of events, one man’s misfortune is another nation’s gain. Torrential rains in the west of Newcastle collapsed a decaying Victorian drainage system, flooding nearby housing flats and causing massive damage to the surrounding areas in England last May 2012. The Duke of Northumberland, who owned the land under which the pipe broke, was faced with a £12 million repair bill. What does a cash-strapped aristocrat, who happens to live in the Hogwarts castle, do under such circumstances? Why, offload a portion of your estate’s valuable art collection, of course.

Paintings by Old Masters, super rare books, and designer antique furniture—the priciest item being a Roman marble statue of Aphrodite circa 41-54 AD—were dusted off and auctioned at Sotheby’s to help pay for repairs and restorations. One of the 80 or so heirlooms up for sale, Lot #183, was a 1734 Pedro Murillo Velarde map drawn up in Manila, tagged as the “first scientific map of the Philippines.”

One of the 80 or so heirlooms up for sale, Lot #183, was a 1734 Pedro Murillo Velarde map drawn up in Manila, tagged as the “first scientific map of the Philippines.”

How did a map of the Philippines end up in some dank English castle? In 1762, the British occupied Manila, following their victory over Spanish forces in the Battle of Manila. When Manila fell on October 6, 1762, British soldiers pillaged (and raped, razed, and plundered) the city for 40 hours. One of the looted artifacts, taken by Brigadier General William Draper, was a set of eight copperplates of the 1734 Murillo map, the most comprehensive map of the archipelago at the time. (Fr. Murillo Velarde was the Jesuit priest and polymath who designed the map, also known as Carta hydrographica y chorographica de las Islas Filipinas, but it was drawn and engraved by the skilled Filipino artisans Francisco Suarez and Nicolas de la Cruz Bagay.)CONTINUE READING BELOW RECOMMENDED VIDEOS

Draper donated the copperplates to Cambridge University, which ran new prints of the map. Later, the British melted the copperplates when they needed copper to print their admiralty charts. One of these prints was then acquired by the Duke of Northumberland, who kept the map for over 200 years, until it was unearthed after the flood, put to the auction hammer and won over the phone by a Filipino businessman named Mel Velarde (no apparent relation to Pedro) in 2014.

The “Mother of all Philippine Maps” arrived in the country on April 28, nearly three years after it was auctioned off. Esquire emailed Mel Velarde to talk about the map, which he is donating to the National Museum.

Hi Mel. Congratulations! What does it feel like to finally bring the Murillo Velarde map home?

The signing of the deed of donation with Solicitor General Jose Calida last April 21, 2017, and the subsequent collection of the map from Sotheby’s London, handed to me personally and to the Assistant Solicitor General (Usec. Henry Angeles) last April 28, 2017, marked the culmination of a journey that started on Nov 4, 2014. On that day of the auction I had a mission: to participate in the auction of this map by Sotheby’s London, to win the auction and bring that map back to the Philippines.

I embrace this whole journey as a personal civic duty; as this journey culminates, I have jubilation in my heart, and triumph in my mind.

Relief, because the 1734 Murillo Velarde map has finally arrived in the Philippines, and will be formally turned over to the government on June 12, 2017.MORE FROM ESQUIREMAG.PHChina and the Nine Dash Lies

Did the map play any part in the arbitration hearings at The Hague?

The 1734 Murillo Velarde map as historic artifact was cited in the Philippine complaint against China at UNCLOS. There are very few copies of this map in the world today—you can count them on one hand. Problem was the Filipino people, through their government, never owned a single copy of this map.

I was told it would be of enormous value that we as a people would own a copy of this map for current and future concerns.

The 1734 Murillo Velarde map as historic artifact was cited in the Philippine complaint against China at UNCLOS. Problem was the Filipino people, through their government, never owned a single copy of this map.

You were engaged in a bidding war that brought up the price of the map up to P12 million. What went on in your mind? Who were the other bidders?

Because the map’s value could not be quantified at that moment, I realized it is precisely not quantifiable because its value is incalculable. After the four million peso ceiling was breached during the bidding, the dominant thing in my mind was to win; I felt there was a larger consideration in this whole exercise where my personal role was but a footnote.

In my mind, I was reminded of soldiers ready to die for our country. It’s a long shot, and quite a stretch of imagination, to think that a map could prevent them from dying or getting into war, but I’d take that shot any day, nonetheless, as I did.

So many other things were on my mind: the map being the one true land title of every Filipino; it being historic artifact; an evidence of our historic rights; a source of narrative for our youth to love our country; an embodiment of our material being as a nation, so on and on, so many other things came into my mind until the price reached almost P13 million pesos. Voila! I won the bidding for the Mother of all Philippine maps. I knew right there and there, she was not mine to keep. My role is to return her back to the people to whom she rightfully belongs. In short, just to bring her back home was my role.

I was reminded of soldiers ready to die for our country. It’s a long shot, and quite a stretch of imagination, to think that a map could prevent them from dying or getting into war, but I’d take that shot any day, nonetheless, as I did.

Aside from the fact that Panacot (Scarborough Shoal) is shown to be part of the Philippines, what else can we learn from this centuries-old map?

The Spratlys is shown there as Los Bajos de Paragua.

The superb artistic creations through drawings of the 12 vignettes that depict a high-quality, advanced and inclusive way of life of people in the archipelago: Filipino men and women working in the farm that represents self-reliance, family unity and sustainable livelihood; showing Armenian, Chinese, Japanese, Spanish, Moguls freely interacting with the ‘indios’; men and women from various economic classes, from top to bottom, engaging with each other in public sites, with freedom, mutual trust and peace; the modern urban planning and design shown in the cities Manila and Zamboanga, that identified the public sites, the church location, the fountains of fresh water flowing thru the community, the house of the governor, etc. etc.—all showing elements of facilities and comforts similar to the best urbanized cities in Spain and other parts of

A new route for the Spanish ships, suggested by Father Murillo Velarde, sailing northward from Palawan to the tip of Luzon and turning eastward to reach Mexico, an alternative route to the usual winding cruise though the Visayan seas where said ships were vulnerable to pirate attacks.

The almost 900 cities and towns identified in the map to which Filipinos of today could very well relate with since most names have remained the same and their locations surprisingly accurate including the markers for mountains, seas, lakes, trees, etc.

Between the islands of Palawan and Mindanao, a large medallion is drawn on the map and inside it is an enumeration of the major resources such as animals and plants, fruits and minerals, and all other nature’s bounties— each identified in particular—all intended to highlight the richness and diversity of the resources in the archipelago. I call this the wealth medallion that is on the map.

I can go on and on, and we will never finish!

Despite having won the Hague ruling, the Philippines is no closer to taking back our islands. Perhaps we should send a copy of the map to the Chinese embassy?

That’s one. But seriously, it took more than 80 years before China took those islands from us. As early as in the mid 1930s, Chinese naval teams started planting fake markers bearing dates as early as 1900. Post World War II Chinese children were indoctrinated and brainwashed to believe that these islands belong to them; so much so that when these kids grew old and took control of their government they launched the offensive and occupied these lands. Because of years of indoctrination, they felt that they were doing these based on moral grounds.

So how do we fight a super power whose present leadership and its followers committed these belligerent acts based on moral grounds? Well, the answer is: only through moral grounds.

We too therefore must be willing to carefully craft our moves for the next 80 to 100 years in order to get these islands back. We must engage with the new generation of Chinese youth in authentic ways and in a manner that would summon their self-respecting values, appealing to them not by subservience or capitulation, but by moral reason.

So how do we fight a super power whose present leadership and its followers committed these belligerent acts based on moral grounds? Well, the answer is: only through moral grounds.

The present minds of this generation, yours and mine, cannot fully comprehend the full measure and power of the UNCLOS decision to future generations. Yet, together with e-book of Justice Carpio, that UNCLOS decision provides ammunition to the real and more defining battles of tomorrow: battles that can only be won on stronger and more authentic moral grounds.

Is there significance to having an actual, physical map in an era of post-truth, fake news and Facebook manipulation?